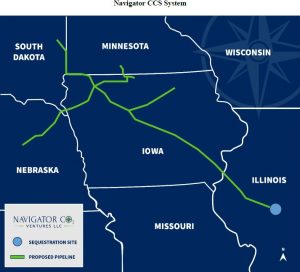 Des Moines, Iowa — A key state lawmaker is drafting a plan to require that a large percentage of landowners agree to a carbon pipeline project before state regulators could approve seizure of the remaining property through eminent domain.

Representative Bobby Kaufmann of Wilton is chairman of the House State Government Committee.

In 2006, the Iowa legislature overrode Governor Vilsack’s veto of a law that has limited the authority of local governments to seize private property for economic development projects. Kaufmann says current state law requires transmission lines and pipelines that ship electricity or products through the state to sign up a majority of landowners before the Iowa Utilities Board can grant eminent domain to seize the rest.

But Kaufmann says the two proposed pipelines aren’t just pass through operations like Dakota Access. Each would transport carbon emissions from Iowa ethanol plants, so he says the current law must be changed so it applies to pipelines with terminals inside the state’s borders.

Kaufmann says he’s currently aiming to force pipelines to have contracts with around 75 percent of landowners before state regulators could grant permission to get the rest of the property through eminent domain. Kaufman says he’s researching pipeline-related laws in other states and discussing the issue with stakeholders in the two proposed carbon pipelines that would cut through Iowa.